Tychy is one of the biggest cities of the Silesian Province (with a population of 131 547 according to the population count of 31 Dec. 2004). It is situated in the Southern part of the province, below 300 m b.s.l., between O?wi?cimska Valley and Silesian Upland. The city belongs to the Carpathian macro-region, West Carpathian Mountains county, West and North Sub-Carpathian Valleys, covering – among other regions – part of the Oświęcimska Valley.

The city is situated at the crossroads of international route Warsaw-Vienna (it is Beskidzka Street in Tychy) and domestic route Opole-Kraków (Mikołowska and Oświęcimska Streets). There is a straight-line distance of 58 km South by air to the airport in Pyrzowice and 65 km West to the airport Kraków-Balice, about 30 km North-East to the Czech border and 55 km North to the Slovakian border. The A4 motorway runs 12 km away from Tychy. 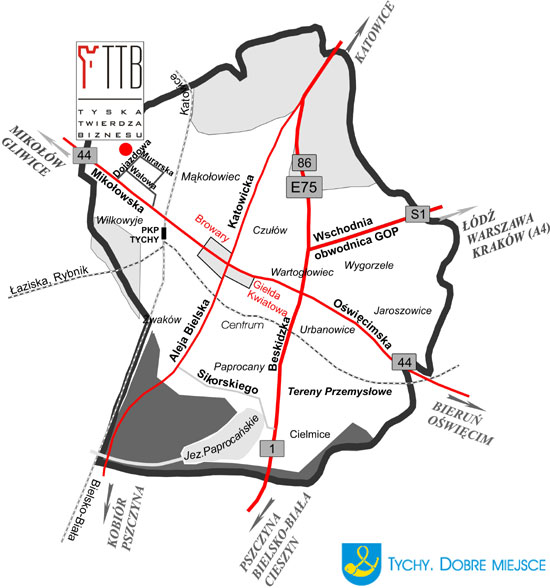 The mountain chains Silesian Beskid i Żywiecki Beskid are about 25 km from Tychy. Considerably short distance of about 30-45 km from some of the health resorts in Beskidy such as Szczyrk, Żywiec or Wisła and about 38 km from the biggest town in the region- Bielsko-Biała, make Tychy a good base for mountain excursions but of course not as convenient as Bielsko-Bia?a itself. On a cloudless day you can admire the panorama of Silesian, Small and Żywiecki Beskid – including the highest mountain of Beskidy range – Babia Góra (1725 m a.s.l.) and Makowski Beskid to the East of the horizon. From the South, East and West the city is surrounded by the Pszczyna Woods that are the remains of the former Pszczyna Forest, and Katowicko-Murckowskie Woods stretched at the North of the city. They are a part of the Southern part of the Protective Forest Strip of the Upper Silesian Industrial Area. 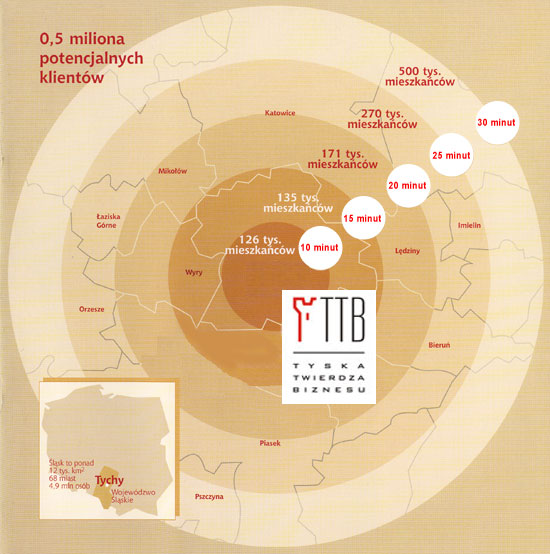 The city of Tychy is situated within the Vistula River basin, catchment area of Little Vistula.

High population density in this region and well developed communication systems among the cities are the main factors of urbanization of the whole Silesian agglomeration.

Dynamically developing economy and growing prosperity of the inhabitants make this market look stable, prospective and attractive from the investors’ point of view.

Tychy is one of the key cities of the Silesian Province with an  increasing economic growth over the last few years.

Thanks to its demographic structure as well as the economic rates Tychy became one of the most attractive Silesian cities for the foreign capital.

The city of Tychy is situated at the crossroads of international route Warsaw-Vienna and domestic route Opole-Kraków, and about 30 km from Katowice – highway.

Short characteristic of the inhabitants of Tychy: